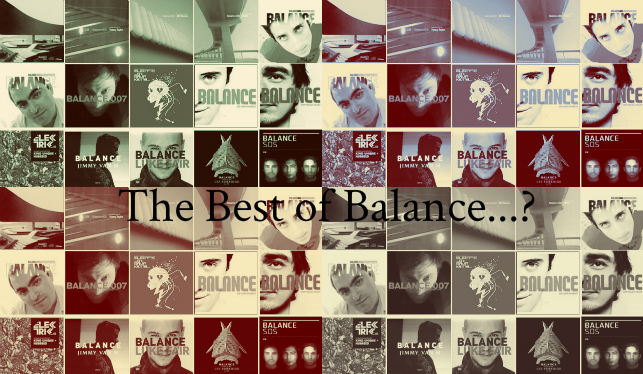 The Best of Balance…?

For dance music aficionados of a certain vintage, raised on the turn of the century offerings of international heavyweights like Global Underground and Renaissance, the Balance Series still feels like the new kid on the block. Brace yourselves, guys – it’s now well over a decade since Melburnian Sean Quinn opened the batting for his home town’s compilation series in November 2001, and it’s been quite the journey (both musically and geographically) to Balance 023’s English selector, Radio Slave.

Balance now stands shoulder to shoulder with DJ-Kicks, Fabric and Late Night Tales as one of dance music’s most consistently surprising DJ mix series, reinventing itself several times over its decade-plus existence. Clubbing trends wax and wane, as do the club-going habits of punters of all ages, but the music remains – and if you’re late to the Balance party, or even tuned out from time to time despite being there since the beginning, 23 compilations is a lot of music to trawl through to find the sound that warms your ear holes.

Which is why I’ve done it for you. And while I’m as big a fan of Paolo Mojo’s terrace house disc or Jimmy Van M’s mid-tempo disc or Nic Fanciulli’s warm-up disc as anyone – and Deetron’s Balance 020 could quite easily sub in for any of my selections – these are the seven Balance releases that still pique my interest from start to finish after many, many years of poring over their contents.

While his Sydney counterpart Kid Kenobi was dominating Australia’s then fledgling dance festival circuit with funk-filled party breaks, Phil K was quietly becoming the public face of a deeper, darker and more spacious take on the sound down in Melbourne. The Balance 004 tracklisting reads like a rogue’s gallery of the local talent of the time, particularly on the opening Breaks Disc – Luke Chable, Scrambler, EK and Dark Alley (Phil with a pre-TV Rock Ivan Gough) all lending their production skills to a brooding, techy selection. The House Disc is a sleeker, sexier, and noticeably slower incarnation of the dark tribal vibes of earlier Balance mixes, underlining the versatility of its compiler while pointing towards a more open-ended future for the series – and serving the world notice that the Balance Series had well-and-truly arrived.

The Timeless Megabomb: There are bigger tunes sprinkled across both discs, but the fact that J & S Productions ‘Sunrise’ also featured (with bonus acappella) on Steve Lawler’s Lights Out set in 2002 tells you just how vital it is to tribal house’s golden era.

Ask any group of die hard progressive house fans to nominate their all-time favourite mix, and chances are just as many will be shouting Balance 005 from the rooftops as there are singing the praises of Messrs Sasha and John Digweed. That it’s pushing a not-strictly-prog agenda speaks volumes for the way James Holden was able to capture that moment where progressive and the emerging wonky tech sound of his Border Community label crossed over, introducing the world to artists like Petter in the process. Whether or not Holden’s detour into less conventional musical territory not long after Balance 005 was a wise one is entirely in the ear of the beholder, but its place in the pantheon of classic compilations remains assured. Of its time yet utterly timeless, as all of the best music is.

The Golden Run: As impressive as the shifting up of gears from Meek’s sinewy disc two opener ‘Happy’ is, it’s the disc one roll through Jase From Outta Space featuring Claire ‘Do What You Want’ (Infusion’s Sky mix), two versions of the kaleidoscopic techno of Nathan Fake’s ‘Outhouse’, and FortDax’s ‘Fortune Telling Fish, Curled To Suggest ‘Home’‘ that sticks in the memory.

The Timeless Megabomb: Where to begin? You could mount a convincing case for anything from the ‘golden run’ above, the Kosmas Epsilon remix of FC Kahuna’s ‘Hayling’ or the trance perfection of Epsilon 9 ‘Lifeformation’ (Infernal Machine Mix). Yet it’s PQM ‘You Are Sleeping ‘(PQM meets Luke Chable Vocal Pass) that best holds its dancefloor freshness to this day.

Desyn Masiello wasn’t a complete unknown when he took the Balance helm in 2005 – mixes for Bedrock and Yoshitoshi are pretty decent calling cards, after all – but Balance 008 saw his star quickly go supernova outside of just progressive house circles. The sound of both discs represented a marked, umm, progression out of prog territory and into housier realms for the series as well, the second disc in particular heavy on the funk factor with tracks from the likes of Joey Negro and Raul Rincon. It’s disc one where Desyn really shows off his DJing chops, though, subtly shifting the energy across a set that feels like an entire club night compressed into a little over an hour. The tempo builds so smoothly from the opener, Will Saul’s ‘Mbira’, that you barely realise you’re in the home strait until you notice your hands held skyward.

The Timeless Megabomb: The debut of the vocal-free original version of Chris Lake’s ‘Changes’ to close out disc one is still quite the moment, but opening disc two with ‘Halcyon + on + on’ – perhaps the most timeless of all Orbital’s megabombs – is the real masterstroke. “The whole point of [Balance 013] is for the CD to feel like it’s always kind of starting again,” Omid 16b told me in a 2008 interview for Time Off magazine. “It’s constantly questioning you, but there’s a natural flow where none of the tracks feel like they’re forced in to each other.” It was the circular nature of this ambitious three disc set that threw a lot of people when Balance 013 was released, though that non-linear approach is a big contributing factor to its perennial freshness. Omid, Demi and returning Balance hero Desyn Masiello never stand still with a house-heavy set that effortlessly delves into yacht rock, disco and progressive, introducing future stars (three tracks from then little-known Aeroplane, for example) when not saluting legends such as Inner City, The Cure, and Bryan Ferry.

The Golden Run: Disc two leaps out of the blocks so quickly that you’re dropped in the middle of the disco funk of Spirit Catcher’s ‘Brain Candy’ before you realise five tracks have flown by.

The Timeless Megabomb: The hands-in-the-air moment is a long time coming – thankfully, the spiralling melodies and bouncing chord progression of Michael Cassette’s ‘Shadow’s Movement’ towards the tail end of disc three are well worth the wait.

Hailed as a successor to game-changing DJ mixes from Richie Hawtin (DE9) and Sasha (Involver), what’s often forgotten about Joris Voorn’s set is just how much it throbs once he puts his foot down. The studio trickery that sees 102 song fragments of varying sizes laid down across 28 ‘sections’ on two discs is impressive, but even the finest mosaic is only as good as the pieces used to build it. Spoken word snippets come and go; bumping techno gives away to mournful atmospherics; samples so fleeting that only their creators could ID them fly through the mix; even the intro of Goldie’s ‘Timeless’ makes a brief cameo. Yet Joris never takes his eyes off the dancefloor for too long, with Balance 014 a fitting snapshot of the Dutch techno don’s sound before he waded into more groove-laden house music waters.

The Golden Run: The effortless leap from atmospherics to halftime funk to tech house through sections two to seven of disc two’s Midori Mix is the Joris sound at its booty-shaking best.

The Timeless Megabomb: It takes something pretty special to score the megabomb title on a disc that boasts Tigerskin’s Pink Floyd-sampling ‘Peter’s Secret Weapon’, so it’s fitting that Joris himself takes the honours with a remix of Dosem’s ‘Beach Kisses’ that’s fit for sunrise, sunset, or total darkness.

The final in a four instalment run of ‘high concept’ mixes (Will Saul’s genre-spanning Balance 015 completes the set), Balance 016 isn’t for everyone – and if you’re prone to losing interest during long stretches without a kick drum, you’d best move right along. Taking up right where he left off on 2007’s At The Controls for React, the French producer ducks and weaves through downtempo vibes, Icelandic songstresses, marimba-driven tech house, ‘70s prog rock, and, well, most genres worth ducking and weaving through on a mix that wears ‘batshit crazy’ like a badge of honour. Agoria’s ability to throw – and, for the most part, land – curveball after killer curveball make each return visit to Balance 016 feel like the first time up at the plate.

The Golden Run: Midway through disc two, the arpeggiated breaks of Avril’s ‘French Kiss’ drops into the deep atmospherics of Gadi Mizrahi’s ‘I Know’, then even further into orchestral territory with Radiohead sonic terrorist Jonny Greenwood’s ‘Tehellet’… before the acid histrionics of ‘French Kiss’ come screaming back in from afar. A love-it-or-hate-it moment.

The Timeless Megabomb: With disc one’s reverb-drenched ‘Gun’ by Emilíana Torrini a little too ethereal for megabomb status, it’s hard to go past the synth lead reaching for the stars in the Serge Santiago remix of Shit Robot’s ‘Simple Things (Work It Out)’.

Prog fans were primed for something special by Nick Warren’s understated Balance 018, and Spaniard Henry Saiz subsequently delivered the mix they’d been dreaming of since James Holden had them blissfully closing their eyes. Balance 019 feels like an event of importance within moments of an intro that searches across a radio dial before settling on a voice reciting Arthur William Edgar O’Shaughnessy’s ‘Ode’ (“We are the music makers, we are the dreamers of dreams…”). Mists swirl, toms thunder, a psychedelic journey begins. Saiz peaks early on both discs, drifting his selection in and out of sharp focus where others may have shot for one more climax. With over two-thirds of the material either written, co-produced or remixed by Henry and his Hal Incandenza alias, it’s as close to pure artist album as Balance has come.

The Golden Run: As seamless as the build across the first nine tracks of disc one to the glorious Coro Novoa & Spaceman ‘Black Heart’ (Henry Saiz’s 95 Cassette Rework) is, the way Henry keeps all the plates spinning from his remix of Eelke Kleijn’s ‘The Lone Ranger’ through many twists and turns to his Dosem collab ‘Zen Boat’ five tracks later is exceptional.

The Timeless Megabomb: Three tracks into disc one, Hal Incandenza – ‘Mystical Tree’ signals take-off, encapsulating the spirit of both of the man’s production monikers in five minutes of bliss.

Kris Swales is a regular contributor to The Music, former editor of Sydney dance music weekly 3D World, and frustrated semi-retired drummer. He occasionally co-produces tunes under the Skins moniker, but will probably be best remembered for his reverent John Farnham bootleg. 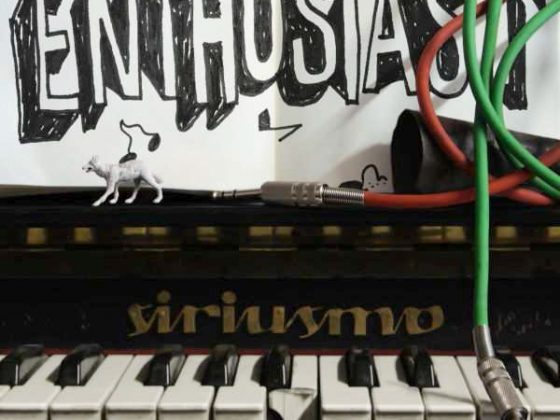 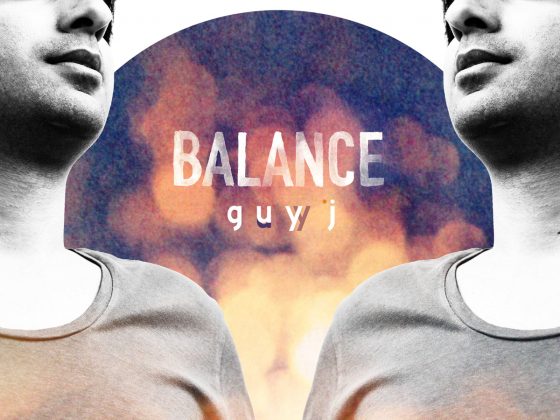