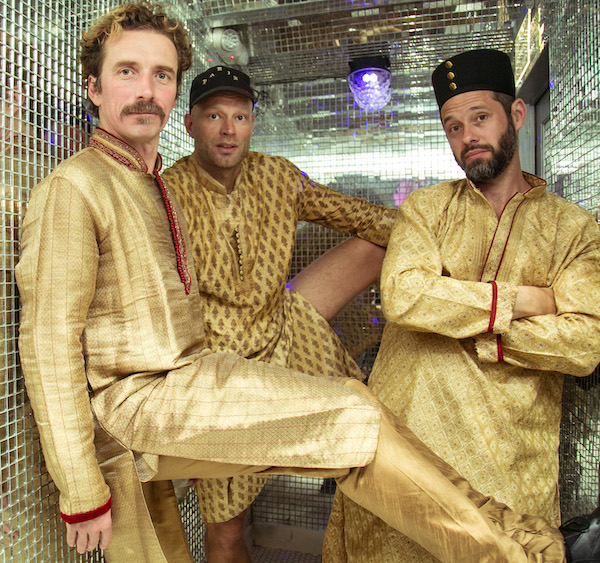 In the years since their inception WhoMadeWho have established themselves as one of the definitive underground bands of their generation.

A group whose grasp of emotional depth, heartrending melody and inspired songwriting is exceptional, the Danish outfit is comprised Tomas Høffding, Tomas Barford and Jeppe Kjellberg. They have become renowned for their exemplary back catalogue, consummate professionalism and standout performances all over the globe, from Roskilde to Sonar, Melt! to Burning Man, producing six albums and a plethora of EPs, singles and remixes on labels like Kompakt, Innervisions, Life & Death. With Barford’s penchant for electronic music poetically juxtaposed with Høffding and Kjellberg’s respective backgrounds in rock and jazz, their music is an electrifying combination of sounds, merging a variety of influences to produce a unique sonic fingerprint that is emotive, irresistible and immensely satisfying.

The ‘Synchronicity’ series is OUT NOW on Kompakt.

Synchronicity II and III will be released in the coming months including collaborations with Mano Le Tough, Frank Wiedemann, Perel, and many more…

Well, my parents vinyl collection got stolen when I was a little kid, and when they bought now music, for some reason they just bought classical and folklore music. So, there wasn’t really any contemporary music in my childhood. But I remember getting a lot of emotional experiences from Bach, but also from this Irish band called Planxty, that we listened to a lot… also danced to, in fucked up ways.

Honestly, when I became a teenager, I fell madly in love with 60’s and 70’s rock music. I thought dancemusic was stupid. But then i met the guys from wmw, and got ot on the clubs and felt the vibe, and I fell equally in love with electronic music. Music really opened op for me for the second time in my life. Fuck the whole verse/chorus thing. Fuck chords. Just dive out on the 4/4 beat and see what happens. Anything goes…

Again, I was thrown right in to it in the first years of travelling with WhoMadeWho, and I’m a not sure it would be fair to pinpoint one experience.

I am inspired by an extremely wide range of artists. I think one of the strengths of WhoMadeWho is the fact that we are not 3 Beatport nerds raving over the same artist. It doesn’t make sense for me to namedrop hip producers that no one heard about yet, this is Tomas Barford’s thing… ;-).

I love a LOT of electronic artists, such as Rufus Du Sol, Gold Panda, Moderat, et al. But, I’m also hugely inspired by David Bowie, Bruce Springsteen…songwriters. Air is also a big deal for me.

I guess my late-night whole-album infection might be Chilly Gonzales – Room 29. That’s a really cool piano/spokenword/low singing album. It fills my living room with nice vibes, and makes me chill.

In WhomadeWho, we go at it in a wide variety of ways. We each have or own room/studio, With each our mics, guitars, and synths. We have a lot of nice vintage synths and stuff (but we are assholes about it), sometimes the best stuff comes totally from software-synth-based in a two hour flight. Me and Jeppe sit in each our studio and do vocals all the time. A lot of vocals. Then we listen to them together, and decide which ones makes it to the releases, and which ones don’t. Sooo many songs /melodies /words ends up in the bin.

Sometimes we jam together all 3 of us, and then some beauty comes out. We also like to go out in the world and join cool people in their studios and just start some stuff from scratch. Sometimes they come to Copenhagen.

In the end its all about the music. Sometimes you do something that connects, a lot of the time you don’t. So the main thing I guess is just to make a lot of music, so you can go with the top 10% of your tracks and ditch the rest.

We just released ‘Synchronicity I’, a collab EP with Axel Boman, Echonomuist, and Adana Twins, ‘Synchronicity II’ and ‘III’ with other super-cool collaborations including Mano Le Tough, Perel, Frank Wiedemann, and more are in the pipeline. After summer we are starting up a full WMW album. We have a lot of ideas lying around, and I am super exited to see where this is going. Oh, we also spet some time in Miami and Copenhagen making tracks with DJ Tennis. That might also come out at some point.

It’s a classic WhomadeWho selection, some fun, some weird, some pretty, and some efficient. We like to stay somewhere between disco and techno, but somehow, always stay away from the hi-hats, which often give us stress.

Applescal – Incognitana
Applescal since he always deliver special sounds and often has an alternative view on club music.

This would be ‘Heads Above’… That track always feels so good.