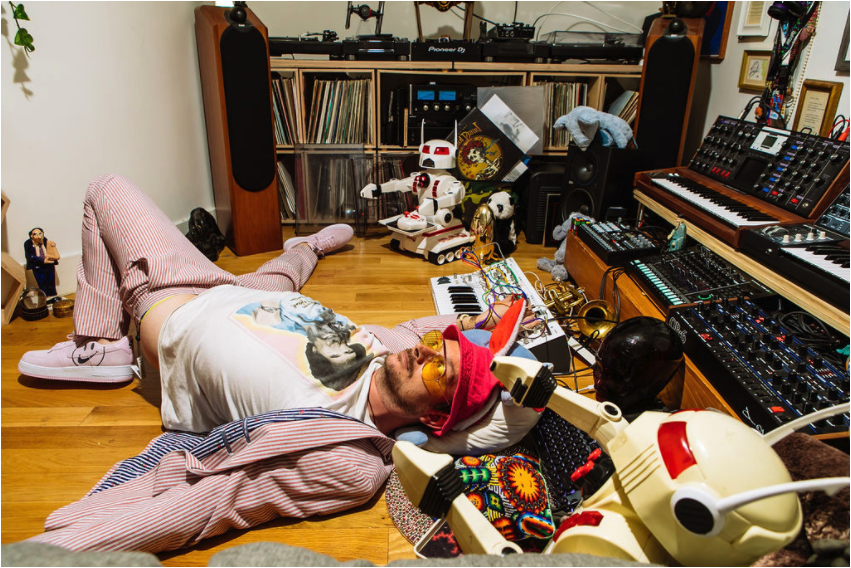 Prolific Icelandic artist and Brooklyn native Hólmar was formerly one half of the Thugfucker outfit.

Hólmar has also worked on other collaborations such as Lovestruckk with Nico Stojan, Theory of Light with Brian Cid, and The Birds Fly South with Maxxi Soundsystem.

These days he likes to go solo on his own musical adventure, where his organic sounds always fuse house, disco, and weirdness into fun new forms…

Universal Lovers – Let There be Light
This is a project with Pattern Drama & Jonny Cruz and vocals by my friend Gengiz Attasoy from Istanbul. We did this one years ago, but it finally came out on a Bar25 – Sounds of Siren Vol.5 compilation earlier this year

Bjorn Salvador – Destination (Holmar’s Acid Tourist Remix)
I did this remix earlier this year for Nordic Voyage , a new Icelandic label that one of my old school raver homie Leon Kemp just started.

Disarmed – Disarmed
A remix I did with Nico Stojan under our “Lovestruckk” moniker for his label Ouie a year ago.

My father has pictures of me with headphones on falling asleep to Bohemian Rhapsody. So I have always been into Queen since I can remember, followed by Kiss, Prince, and Frankie Goes to Hollywood. These artists populated the most valuable spaces in the collage I had on my wall, AC/DC too. My dad is a master Yodeler turned avid Glockenspiel player, and my mom seduced audiences with the Harp for the now-defunct ‘Reykjavik Harp Ensemble’. With the music they made every day at my house; I felt like I was in a lost chapter of Heidi (I play the harp also), but I eventually joined my school choir. I was the only boy in the choir, but not sure if it was for the music, or the company of so many girls. Hmmm. They were so fun, nothing but happy memories there. But, if I’m being serious, my parents are both artists and would play music all the time at my house. My dad is an avid jazz enthusiast, and I have probably been listening to Charlie Parker, Miles Davis, and Chet Baker since I was in the womb. My mom was always blasting Abba, Marian Faithful, Fleetwood Mac, and Eartha Kit late at the night.

I think I was 12 years old I was hanging out with my best friend Magnus, who had a badass Walkman. We used to nerd out all the time. We were probably at a Ping Pong class, or practicing fly knitting. (Won the silver medal in the school championship that year with his help) I remember him bobbing his head real hard. I asked him what are you listening too. He took them off and said, it’s called “Acid House,” then put his headphones on me. He played it real loud, and I have never looked back since.

At the age of 15, I was a part of a graffiti group called the Peace Force. An underground party collective called “26th of May ” commissioned us to do a piece at a secret event they did at an infamous old run down club in downtown Reykjavik called Keisarinn (The Emperor). (You can see it in an old Icelandic party movie called “The Remote Control” on Netflix). My friends and I were way too young to get in, but got to be a part of it because of our art. They had some live music, Zanziboys performed live, I think, and DJ Ymir was at the helm of the decks. I will never forget his set, he played a very eclectic mix, but lots of house music. He had spent his summers listening to Alfredo in Ibiza, and brought the Balearic vibes to Iceland. Later he gave me my first gig after allowing me to fill in for him while he took a “break” at his residency at N1 bar in the 101 neighbourhood. There, I got a free range of his record collection and unlimited beer. He was a big inspiration to me.

I love the Grateful Dead. I totally missed being a deadhead, living in Iceland and all. I don’t think they ever brought the “Wall of sound” there. But a few years ago, someone recommended I watch a documentary about them. I did. Then I started to listen. These guys are fantastic. I can’t stop listening. They are a real inspiration in so many ways. Glad I discovered them. Even this late in my life. Sad I never got to see them play together or hear Jerry Garcia jam live. I do feel his presence hard when I zone out in my headphones. I was even planning a tour with Dancespirit & Jay Tripwire, where we would do gigs where ever “Dead & Company” played. Follow them hard. But 2020 got cancelled, so that has to wait. Like so many things. Duh.

At the moment I’m savoring a new ambient album that my friend Anthony Middleton from Audiofly has been working on during COVID. Prototype X. It is taking me places. It is fantastic, and I can’t wait to hear him perform it live when we play together at the Art With Me Festival in Tulum this November.

I have super fast maxed out early 2015, 15-inch MacBook Pro that I got from my dear friend Azm at Love on Height Computers in San Francisco. The one with all the fun ports included and with his magic touch. I use Ableton. Currently, I have a Fireface800, Ob-6, Moog Voyager, Siel DK 600, Analog Rhythm, Roland TR8s, and an Arturia Matrix Brute. Then I have some old Mackie HR824’s. I have some more stuff, but it is currently on loan at my friend’s studios.

I have been working with Nico Stojan, Phillip Jung, Jon Charnis, Brian Cid, M.O.N.R.O.E and his brother Adison on an off for some time now. Also, have some unfinished jams with my friend Ruede Hagelstein and Slumber (Ruede, Ruede, where are you!!!, Amber, Oona!!! too, I mean Hellooo!!), and Tara Brooks I have been talking about making some beats too. I hope to get into the studio with them all and finally finish all the work we have been doing in the past few years. It was already hard before COVID to get together in the same place, so that you can imagine now. But I am hopeful to be in the same room with theses fine gentlemen/ladies so we can finally put the cherry on top of it and seal it with a kiss ;) Maybe in 2021, it will see the light of day. Who knows, perhaps sooner than that. One can only hope.

My next gig will be with my family at Do Not Sit On Furniture in Miami on the 24th of October, followed by Art With Me Festival in Mexico in mid-November. As much as I love intimate gatherings with my friends I have sooooo missed playing for a proper dance floor. Miami will be a ‘Sit Down on The Furniture’ event so it will be a little different from the usual sweaty, lovely Mayhem there. Mexico will be outdoors with the view of the beach. Can’t wait! I’m also launching my channel on Twitch this fall, which will be once a week thing. I have some fun things planned. Stay tuned on that one. I promise it will be entertaining,

The mix was recorded at my house in Brooklyn, using both CD’s, and USB’s. It was during burn week, and I was hanging out with some friends listening to sets at the digital burn. It was early in the morning and we were pretty cracked out. I decided to jump on the decks and record this mix. I had a couple of phone calls interrupting while recording, forgot to turn the Wifi off, using my Pioneer iPhone recording app, so I had to splice it together in Ableton too. When I listened to the mix, I trimmed some things out of the mix that I thought did not fit in, mostly an interview with Kurt Vonnegut mixed with Percy Faith that seemed unbefitting. It did feel right that morning. You can only imagine. I must have been high. I remember while recording it, I felt a little bit like I was back on the Playa playing music in a secret camp during a whiteout with a few friends powering through the storm.

Oona Dahl – Godtripper EP
A bomb by Oona Dahl and a collab with my brothers Dancespirit,  plus a remix by Patrice Baumel.

If I could recommend only one of my tracks for you to listen to, it would be:

Holmar Filipsson & the Reykjavik Massive – Creme Brulee
Try this one from the vault. A forgotten classic from the infamous Crack & Speed label, I did with my dear Parisian friend Jef-K back in the early 2000s. A collab with fellow Icelander that hits the spot. Not sure what area. Hmmmm. But it does, old school. Also, my favorite dessert.

If I could recommend only one track for you to listen to, it would be:

Adriano Celentano – Prisencolinensinainciusol
I ended this set with one of his tunes, “I want to know, parte2”. There is something about this one that always puts a smile on my face. Something we all need right now. It’s in fake English, watch, listen, and have a laugh.

Becoming Bond. An Amazing documentary about George Lazenby. Talk about a serious Aussie badass. Wow. Then, make some popcorn and watch Her Majesty Secret Service after, maybe the best most underrated Bond movie. Especially after watching the documentary before it.